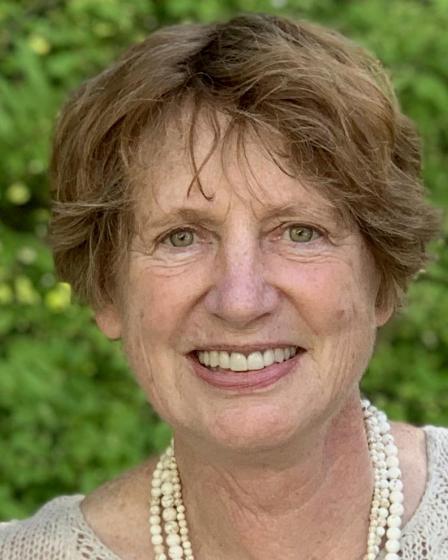 For being a leading voice for environmental education and sustainability in higher education, and catalyzing environmental programs around the country and globally, Nan Jenks-Jay ’86 MES was honored with Yale School of the Environment’s Distinguished Alumna Award during Reunion Weekend 2021.

While the state of the world in 2021 may not easily inspire optimism, even among folks who are normally cheery, it seems negativity has never entered the mind of Nan Jenks-Jay ’86 MES.

“I am an optimist. I’ve never seen a pessimist succeed in our work. It’s an important characteristic,” says Jenks-Jay. “If you look for inspiration everywhere you will find it.”

While a student at YSE, Jenks-Jay had planned on obtaining her PhD. But life interceded. As a single parent with a significant amount of college loan debt, she returned to a position at Williams College as an associate director of the environmental studies program.

“I knew that I was going to be doing work in the environment, but I never dreamed that I’d be in higher education or that it would have provided the opportunities it did to effect such incredible change,’’ she says.

After Williams, Jenks-Jay became Director of Environmental Studies and Hedco Endowed Chair at the University of Redlands in California. In 1998, she was appointed Dean of Environmental Affairs at Middlebury College —a position she would hold for the next 23 years. It was there that she hit her stride.

“Middlebury wanted to be a leader in the environment, but they didn’t know what it meant,” she says. “They recruited me to create that leadership… and they had no idea what they had gotten into.”

Middlebury began to reduce its carbon footprint in 2001 and set an initial goal to lower all carbon emissions to 8% below 1990 levels by 2012. When it became clear this could and would be achieved, students rallied to help push through a proposal to achieve full carbon neutrality by 2016.

“We relied heavily on partnerships and collaborations that involved the senior administration and faculty, staff, and students in classwork and a committee that charted the course,’’ she says. “I think the administration was so impressed with the way this was managed, what they were hearing, and the options and alternatives that were proposed that the decision was unanimous. We had to do a lot of tweaking, but in this kind of work you have to build enormous trust and relationships, and you have to continue to support those and nurture them.”

Daniel Piotto is hoping his studies in forest restoration and plantation forestry can help counter devastating tree loss in one the country’s “last frontiers.”

Along the way, Jenks-Jay worked with three presidents, five board chairs, and four provosts and treasurers—a testament to her relationship-building abilities.

“When we accomplished this, I wrote everyone who had touched the work over the years, and thanked them, even if they were at other institutions or had graduated and gone on with their life,’’ she says. “Almost 100% of them wrote back and said it was the most exciting thing they had ever done in their career.”

Katie Michels ’23 MEM/ MBA, a former student Jenks-Jay, says she has a single-minded focus on improving the stewardship of people and the earth in partnership with myriad perspectives.

“Nan is someone who brings such care to the work she does – not just on behalf of the land and the birds and the plants, but also to issues of justice and interpersonal relations,’’ says Michels. Her active efforts to expand the environmental movement’s care for issues of justice, diversity, equity, and inclusion have helped me see the work I hope to do much more broadly.

These days, in addition to her consulting work, Jenks-Jay spends much of her time at the farm she owns with husband Carl — Miller Hill Farm Nursery & Garden in Sudbury, Vermont.

But, as you might expect, it’s not just your average farm. The couple does everything in their power to support the natural environment around them, conserving 100 acres, partnering with the fish and wildlife service and a utility company to install osprey poles, raising native plants for restoration projects, and educating the public about pollinators, birds, and plants.

Inspiration can often be found in less than obvious places and she says she does her best to seek it out, wherever it exists.

“I think you have to look for opportunity, because just like inspiration, it’s out there,” she says. “You need to watch trends, and be a predictor and forecaster, as opposed to a reactor. Because if you’re a reactor, you’re already behind the game.”