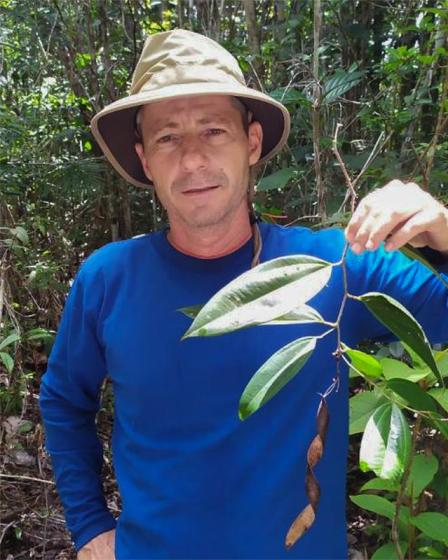 A professor of agroforestry in the Bahia region of Brazil, Daniel Piotto is hoping his studies in forest restoration and plantation forestry can help counter devastating tree loss in one the country’s “last frontiers.”

Daniel Piotto ’06 MF, ’11 PhD earned a degree in forest engineering in his native Brazil and a master’s degree in forest management at Centro Agronómico Tropical de Investigación y Enseñanza (CATIE) in Costa Rica. It was at CATIE where he first met Florencia Montagnini and Mark Ashton, renowned forestry professors from the Yale School of the Environment working on what would become YSE’s Environmental Leadership and Training Initiative.

“Their work got me really excited,” recalls Piotto, “and the reputation of the forestry program spoke for itself.”

That first taste of YSE convinced Piotto to apply — a decision that started six years at the School, a master’s degree and a doctorate, and trips to forests across the world that expanded his knowledge of different forest biomes and managing forest resources.

“My experience at YSE was my formation into who I am a scientist and a professor,” says Piotto, this year’s Prospect Street Award recipient at the YSE’s Reunion Weekend 2021. The award recognizes a recent graduate who has made significant contributions to the environmental field and who exemplifies the spirit of the School through demonstrated leadership, innovation, and creativity.

While the state of the world in 2021 may not easily inspire optimism, even among folks who are normally cheery, it seems negativity has never entered the mind of Nan Jenks-Jay ’86 MES.

Piotto has run his own consultancy and worked with the Brazilian Forest Service as the head of its national forest inventory, but he says his true calling is within academia. In 2014, he became one of the first faculty members of the new Federal University of Southern Bahia, in its department of agroforestry. Piotto focuses on integrating theoretical knowledge about ecological processes in tropical forests and its application in the design of conservation, production and restoration systems for degraded landscapes.

The Bahia region of Brazil is one of the “last frontiers” of Brazil’s massive network of tropical forests, Piotto says, and there is a particular need for well-managed agroforestry. He has recently led studies on forest restoration and plantation forests in the region, hoping that these strategies can counter the effects of massive deforestation and wildfires across Bahia and other regions of Brazil.

“I’ve dedicated my life to studying this, so I remain optimistic; these forests can grow back,” says Piotto. “I’m not optimistic that people are going to change their behavior in the short-term, so now we ask, ‘How can we adapt?’ Planting trees, managing these forests — that is going to be a very important component.”

Piotto also still leans on his relationships from YSE, regularly contacting or visiting Montagnini and Ashton. He has hosted YSE students and researchers in Bahia and engages with them on fieldwork and data collection, connecting them with other local students and researchers. Piotto has also taught courses for ELTI’s online training program focused on tropical forest restoration.

“Daniel has gone on to be a formidable force in research and management in the tropical forestry world through his work in forest restoration and agroforestry in Bahia,” says Ashton, who also commended Piotto for his “drive and motivation” as a doctoral student and now as a mentor for YSE doctoral students.

Piotto’s recent work — including studies on restoration plantings with endangered tree species and timber stock recovery in southern Brazil, both published in Forest Ecology and Management — proves out Ashton’s assertions. And the more students he teaches, trains, and mentors — in Bahia and from YSE — to be optimistic about the promise of agroforestry, the further his impact will reach.