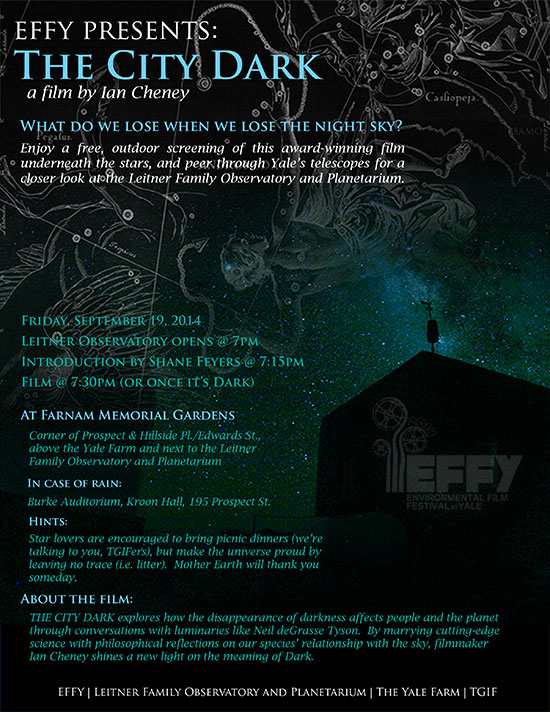 Held every April, during the grueling final days of the academic year, the Environmental Film Festival at Yale (EFFY) has come to fill an important role for F&ES students, says Donald Mosteller ’15 M.E.M.

Packed with films that capture the beauty of the natural world — and the global conflicts at the heart of today’s biggest environmental threats — the festival brings stories to the Yale campus that inspire and infuriate, amaze and provoke.

Above all, Mosteller says, the films remind students why they’re here.

This year, for the first time, organizers will try to maintain those impacts by screening past films throughout the academic year in their “Best of EFFY” series, beginning on Friday night with a free outdoor showing of Ian Cheney’s (’02 Yale ’03 M.E.M.) documentary, “The City Dark.”

The film — which explores the planetary effects of light pollution — will be shown at 7:30 p.m. (or whenever it turns dark) at the Farnam Memorial Gardens, above the Yale Farm, near the intersection of Prospect and Edwards Streets. The event is open to the public.

The documentary was named best film of the 2011 EFFY festival. Four additional films, including other past winners, will be shown throughout the school year.

“EFFY nourishes the love that we all have for these issues, the same love that brought us here,” says Mosteller, Executive Director of EFFY. “And I think that it helps propel us through the hard times of being an environmentalist.”
The Friday night screening is hosted by EFFY, the Yale Farm, and the Leitner Family Observatory and Planetarium. It is also being held in conjunction with TGIF. Free stargazing will also be provided at the nearby observatory.

Launched in 2009, the Environmental Film Festival at Yale features a lineup of full-length films, feature shorts, and panel discussions. The length and scope of the event has continued to grow each year, organizers say.

They hope that adding more screenings during the year will introduce the festival to an even larger audience, promote more collaboration with other organizations on campus, and create more “momentum” for the centerpiece event in April, Mosteller says.

“One of the reasons why I was so drawn to EFFY, and why I believe in film, is because I think it’s one of the few media left that can really shake public opinion,” he said. “People come out of EFFY feeling inspired… We hope that by revisiting some of EFFY’s favorite films in our “Best of EFFY” series, we can nurture that sentiment throughout the year.”
– Kevin Dennehy    kevin.dennehy@yale.edu    203 436-4842
About this story
Tags