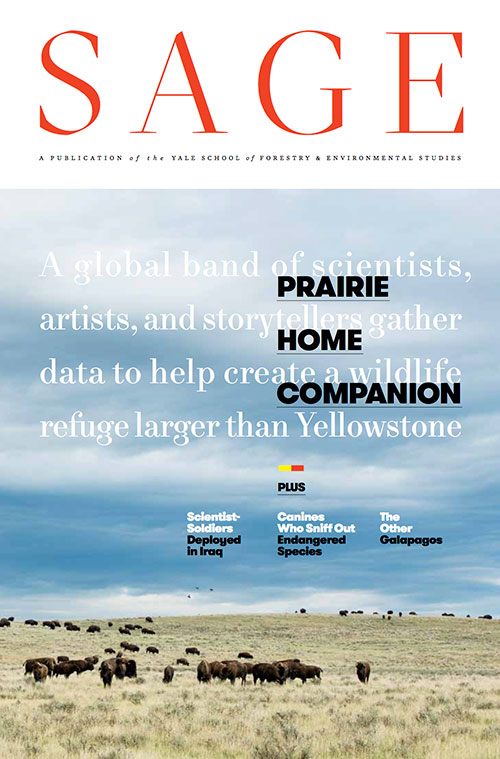 A new issue of Sage, a student-run magazine produced at the Yale School of Forestry & Environmental Studies, arrived in buildings across campus this week. The spring 2015 issue comes with a new look and a bold ambition: to “expand environmentalism” through meaningful conversations about the world and our place in it.

The 40-page issue explores some of the environmental boundaries that define the planet, including a piece by conservation biologist Jesse Lewis on how geographic boundaries can lead to the evolution of a new species and a report by writer Samantha Ostrowski ’13 M.E.Sc. about how political boundaries affect the environmental response to fracking.

In an interview, Editor-in-Chief Timothy Brown ’15 M.E.Sc. explains the vision behind the “boundaries” issue, and why he believes Sage’s potential reach transcends the Yale campus and environmental communities.

“We want it to be read in people who don’t typically work in the environmental field,” he said. “We want to provide them good narrative story telling that’s going to get them thinking about their world in a different way or spark a conversation that they might not otherwise have.”

People will notice a new-look Sage is now available across campus. What are they going to find inside?

The Sage staff will host a release party from 6-9 p.m. Wednesday, April 22 at the Knobloch Environmental Center in Kroon Hall, featuring appetizers from Caseus, cupcakes, drinks, and live music. All are invited.
Our mission statement is: Expanding environmentalism through provocative conversation and the arts. And there is some fantastic artwork in the issue, including a photo essay about the American prairie reserve and “adventure scientists” who are collecting data to create a wildlife refuge larger than Yellowstone.

All these stories center around this thematic idea of boundaries. We hope it gets readers to think about some of the boundaries they have created for themselves and in their own work, what those boundaries are doing, and how they might want to change and expand those boundaries in the future.

This is a student-run publication, but not all of the articles and photos are generated by F&ES students. Where do your submissions come from? And why did you decide to go that route?

As editors we wanted the experience of producing a print magazine that was independent of the digital version, although they remain affiliated and associated. So we did a national call for pitches on the theme of boundaries. And people sent in their pitches from all over — from F&ES, but also from other schools across the U.S. and Canada. And we selected the ones that we thought were strong pitches.

F&ES is really unique given that there’s no other publication like Sage at the other major environmental schools in this country. There are trade publications, research publications, et cetera. But not quite the same niche as Sage. We’re trying to become a platform for environmental discourse nationally and internationally. And I think we’re contributing something very unique here at F&ES to the environmental humanities.

In what ways can F&ES students contribute to Sage?

We’re always trying to get more students involved, whether through writing, editing, artwork, working on podcasts, photography, short videos, or contributing to the environmental discourse through artistic expression. In fact, we’re expanding the website. And we’re growing our staff.

The magazine is obviously available across campus, but you’re also sharing it on campuses around the country. Who do you see as the audience for Sage, now and in the future?

Primarily students. But not necessarily just students who are enrolled or working in environmental programs. We’re going to be sending Sage to Duke, Michigan, Berkeley and some of the other major environmental schools. But we’re also distributing copies to the major journalism schools, including Columbia and Missouri. Because we also want it to be read by people who don’t typically work in the environmental field. We want to provide them good narrative story telling that's going to get them thinking about their world in a different way or spark a conversation that they might not otherwise have.

But we’re not exclusively geared towards students. Our data suggests that Sage is finding a home outside of academia. I think people are hungry for these kinds of narrative environmental stories. They want stories that challenge them to think without telling them what to think.

In the next few weeks you’ll be passing the torch as editor-in-chief. But do you have a vision for where Sage goes next?

Well, it will certainly continue in this direction. Our goal is to become the premiere student-run environmental publication in the country. Will Murtha is going to take over as the editor-in-chief next year. And he and the staff are going to do a great job as it continues to expand.

We’re going to be launching a podcast series in a few weeks. We have some great interviews as part of that — the first will be with [biology professor and Pulitzer Prize finalist] David Haskell. We’re also going to revamp the website to make it more engaging. Sage will host more events and speakers. And we will be growing the writing contest. We grew from 53 submissions last year to more than 125 this year from eight countries. We had Terry Tempest Williams, Sy Montgomery, David Haskell as our judges this year. It’s really exciting to watch Sage expand. And I’m excited to see what happens next year and into the coming years.
– Kevin Dennehy    kevin.dennehy@yale.edu    203 436-4842
Published
Tags