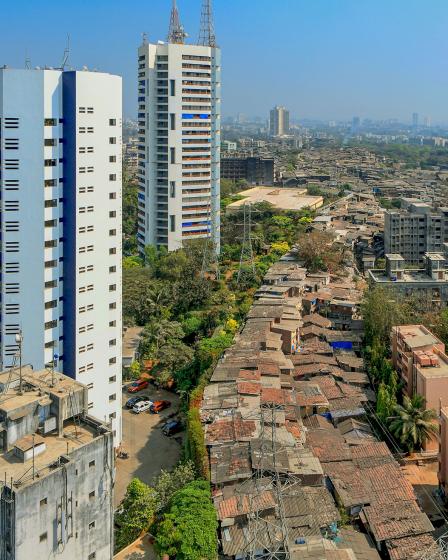 Infrastructure Inequality Is a Challenge to Urban Sustainability

Growing up in Delhi, India, Bhartendu Pandey ’21 PhD walked miles in his urban neighborhood to get fresh water for his family. The trek took time away from his studies and other activities — a sacrifice that young people in nearby communities with potable water didn’t have to make.

This type of infrastructure inequality within regions and communities is the focus of a new PNAS study led by Pandey.  It is one of the first studies that explicitly looks at unequal access to infrastructure as opposed to unequal levels of income.

The study used satellite remote sensing and 2011 census data for more than 700,000 urban neighborhoods and rural areas to review infrastructure in South African and Indian communities.  The results suggest that urbanization as a pathway to sustainable development faces fundamental constraints due to infrastructure inequality.

Biweekly, we highlight three news and research stories about the work we’re doing at Yale School of the Environment to achieve sustainability — for ourselves and future generations.

“What is most surprising is that infrastructure inequalities are very much a characteristic and not an outcome of urbanization. It's just ingrained in the urbanization process,’’ says Pandey, whose Yale School of the Environment doctoral dissertation focused on urban inequalities. He is now a lead urban data scientist at the Urban Nexus Lab at Princeton University.

Karen Seto, YSE Frederick C. Hixon Professor of Geography and Urbanization Science and co-author of the study, says preferential treatment of infrastructure by policy makers is built into policies that then lock in social inequalities. Neighborhoods that are well lit with good drainage, for example, will attract families that can afford to live there while other lower-income families are forced to live in communities lacking infrastructure services where housing costs are cheaper.

“These different types of inequalities reinforce each other,” Seto says.

Infrastructure inequality can affect progress toward sustainable development and the inequalities can persist because of the durable nature of infrastructure, the study found. As urban areas increase globally — they will nearly triple in size from 2015-2050  — infrastructure expansion presents opportunities to address and shape present and future inequalities, the authors note.

“What policy makers could investigate, and address, is how do we minimize that preferential bias when we are allocating infrastructure?” says Pandey. “If you're thinking about achieving equitable or sustainable urbanization, then we need to be thinking about infrastructure inequalities first.”

“This is the framing we need to begin to tackle the grand urban challenges we face as a planet,” she says. “Urban systems are the locus of both problems and solutions for many of the critical challenges we will face over the coming century. Infrastructure inequality within cities is one example of those paired challenges and opportunities.”

Research in the News

YSE faculty members Mark Bradford, Karen Seto, Peter Raymond and Anthony Leiserowitz were recognized by Clarivate Analytics for their published research papers being among the most cited in their field.

A team of YSE-led researchers have now solved a 100-year-old paleontology mystery: How did ancient plants emerge from swamps and riverbanks to new habitats with limited access to water?

Can Gold Mining Be More Sustainable?

A YSE-led study details the severe degradation and deforestation caused by gold mining in tropical forests, as well as the biophysical challenges associated with effectively restoring these landscapes.