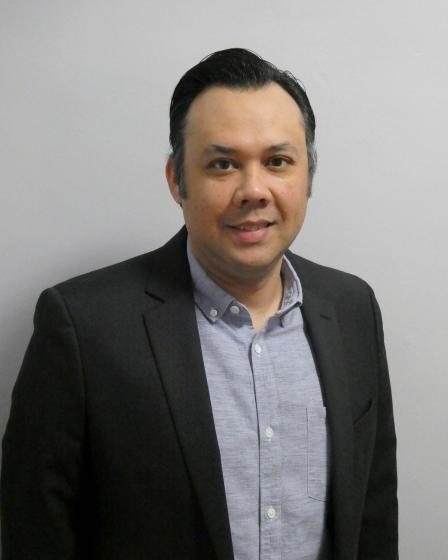 Robert Javonillo has been named the new assistant dean of diversity, equity, and inclusion starting Nov. 22. He wanted to come to Yale, he says, because of his environmental roots and a keen interest in diversity work.

Growing up near the ocean, Robert Javonillo decided early on what he was going to be. His father was in the Navy and his family moved many times but always near a shore. Growing up, he lived in housing near the water in Norfolk, Virginia.

“I used to go down to the bay with a bucket and dip a net just about every day, just to see what I could collect. That’s when I decided that I wanted to be a marine biologist,’’ says Javonillo, who was born in Rhode Island.

Javonillo was the first in his family to go to college, earning his master’s degree in marine biology at the College of Charleston and his PhD in biology at The George Washington University. His father was born in the Philippines and joined the U.S Navy, becoming a cook, and his mother is of French-Canadian descent.

“Even though I did well in high school, I wasn’t sure I would be able to go to college because I knew that it wasn’t just dependent on your grades. I knew it was also a heavy financial burden. I didn’t even know what graduate school was when I was an undergraduate,” he says.

As a first-generation college student, Javonillo says he faced challenges navigating what he calls the hidden curriculum, that is information on how to apply to graduate schools, ask for letters of recommendations, and access college connections and peer mentorship.

While teaching at Morgan State University in Baltimore, one of the nation’s historically Black colleges and universities, Javonillo took note of the struggles underrepresented students had that were similar to his own.

“It really became a driving force for me to take what little power I had and give back, to do the best I could and not just teach students the course material but be a mentor to them — advise them on how to apply for graduate school, internships and all those kinds of things that are not part of the formal curriculum, but part of the hidden curriculum of higher education,’’ he says. “And it’s coming from a place of authenticity because it’s really the hoops I had to jump through myself.”

“Robert’s personal experiences in his own academic career and his leadership at a national level on diversity issues will bring a wealth of knowledge to our DEI efforts and strengthen our focus on this very important work,’’ Burke says.

One challenge for students is accessing help after graduation, Javonillo says.

“I think the biggest need is to try to help students figure out what the endgame is with college. And I think a lot of students are very surprised by the fact that when you walked across the stage to get your diploma, there wasn't someone at the other end of the stage with a job offer, or a graduate fellowship on the other side. And that graduation is a goal. But graduation isn't the end goal,’’ he says. “That’s especially true for first-generation college students because the goal has been for so long that you graduate. But then what?”

A key to DEI, says Javonillo, who recently served as program specialist in faculty development at the National Institutes of Health where he helped recruit and retain a more diverse faculty, is building trust.

One of his first priorities will be to measure how students and faculty feel about DEI.

“I would like to move the needle in a positive direction,’’ he says. “I think if people across campus look toward YSE’s DEI office or program as a model, then that’s success.”

Dr. Dorceta Taylor, senior associate dean of diversity, equity and inclusion and professor of environmental justice, says Javonillo will be a great asset.

“We are excited to have Dr. Javonillo join the diversity, inclusion, and equity team at YSE,’’ she says. “He brings years of experience working on DEI issues to the school and I am sure we will all benefit from having him here.”

About this story
Tags