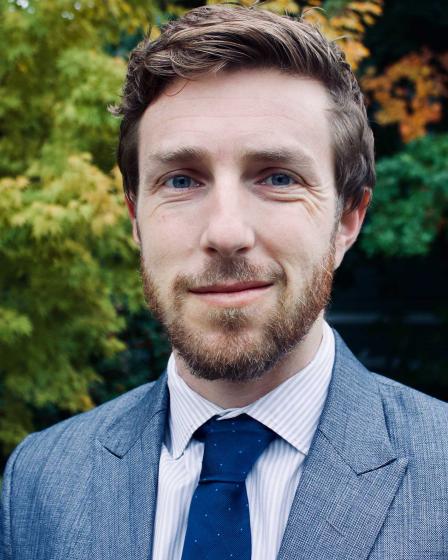 Whether leading climate protests, fighting for Indigenous land rights, or working the land at Yale-Myers, Kyle Lemle is keeping his focus on the importance of forests.

In 2017, Kyle Lemle ’22 MF attended the U.N.  climate summit in Bonn, Germany, as a youth delegate with the U.S. People’s Delegation. He helped make global headlines by organizing a “singing revolt” to protest the Trump Administration’s decision to remove the U.S. from the Paris Agreement and push a pro-fossil fuel agenda.

Lemle has returned to the U.N. climate three times since then, including attending COP26 in Glasgow, Scotland, last year to support the U.N. Environment Program, The Nature Conservancy and World War Zero, a climate non-profit started by John Kerry, U.S. Special Presidential Envoy for Climate. As World War Zero’s eyes on the ground, Lemle published daily articles on the negotiations and nature-based solutions, which were distributed to a global audience.

Prior to attending the Yale School of the Environment,  Lemle managed international and grassroots community forestry projects across the globe, from the pine forests of the Himalayas to the mangroves of Southeast Asia to the urban forest in San Francisco. He came to YSE, he says, to build on his “technical forestry knowledge” to combine those skills with his experience in policy and management.

“Even before I came to YSE and chose to study forestry, I knew forests were my one and only love,” says Lemle. “I have committed myself to forests as my lever of change.

“It is so important to understand all of the value that forests provide because you cannot do conservation work unless you understand the importance of wood products for society.”

Brave, Persistent, and Nimble, the YSE Class of 2022 is Ready to Defy the Odds

After facing “the toughest challenge in a generation,” the YSE Class of 2022 graduated May 23 with a unique sense of community and the will to lead.

A Wyss Scholar, Lemle is focused on land conservation issues in the American West — in particular, his home state of California — where he hopes to lead forest restoration and reforestation efforts to combat climate change. Lemle is also an advocate for the landback movement, which seeks to return political and economic control of land to Indigenous people. Through the Wyss Foundation, he co-organized a panel discussion on landback and Indigenous natural resource co-mangement at YSE this April, which was moderated by YSE Professor of Environmental Justice Gerald Torres and included Charles Sams III, director of the National Parks Service.

“The panel spoke to the importance of including Indigenous voices in conservation, if not giving the land back entirely,” says Lemle. “It sounds radical, but that is the type of change that is needed — incremental steps in some cases, radical change in others.”

Looking back, Lemle recalls a particularly formative experience at YSE, spending two weeks at Yale-Myers Forest with a small pod of forestry students immersed in fieldwork. He will build on that experience this summer as a member of the Forest Crew at Yale-Myers, which he says will be “a cap on all of the technical forestry knowledge I have learned.”

It will also be the last chance to work with the tight-knit group of YSE forestry students who have become a family for him over the last two years.

“Classmates, faculty, practitioners — I’m so grateful to have joined an amazing family of people from around the world who are so passionate about forestry.”

YSE Class of ’22: Akshyah Krishnakumar Seeks to Make Change from the Inside

Akshyah Krishnakumar is seeking to achieve clean energy goals by working from the inside — starting with the fourth largest corporation in the world.

With a background in community organizing and experience as an international Peace Corps volunteer, Lac devoted countless hours at the Yale School of the Environment working to bring communities of people together.

YSE Class of ’22: Lovinia Reynolds is Headed Home to Fight for Climate Justice

Returning to her native Brooklyn, Lovinia Reynolds is graduating from YSE with an eye on climate justice in the largest city in the U.S.