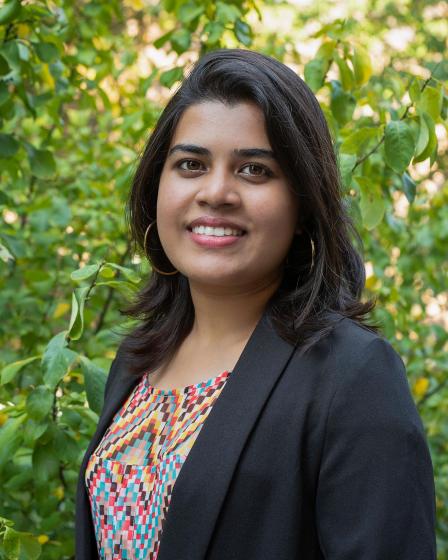 YSE Class of ’22: Akshyah Krishnakumar Seeks to Make Change from the Inside

Akshyah Krishnakumar is seeking to achieve clean energy goals by working from the inside — starting with the fourth largest corporation in the world.

It is all about energy for Akshyah Krishnakumar ’22 MEM, an international student at the Yale School of the Environment.

Krishnakumar, who is from Chennai, India, became especially interested in environmental issues when she participated in a COP21 student protest in Paris as an exchange student in Germany.

“I was very motivated seeing all the other people from different countries and nationalities fighting for a common cause,” she says.

After earning a master’s degree at the Indian Institute of Technology Madras, focusing on developmental economics, she worked as a renewable energy business development manager for a solar developer in India. She had originally wanted to explore a focus outside of energy when she came to YSE but changed her mind when she delved into environmental research and grew convinced that energy is at the forefront of controlling climate change.

“Energy is important across the entire manufacturing and production systems of companies, even if it’s not their core business. And decarbonizing these systems is becoming more important at an increasingly rapid pace,” says Krishnakumar.

As a clean energy associate at the Yale Center for Business and the Environment (CBEY), Krishnakumar co-authored a case study on the Block Island Wind Farm. She also organized a field trip there for the energy Student Interest Group (SIG) and moderated a panel discussion on wind energy.

Brave, Persistent, and Nimble, the YSE Class of 2022 is Ready to Defy the Odds

After facing “the toughest challenge in a generation,” the YSE Class of 2022 graduated May 23 with a unique sense of community and the will to lead.

“The role of an institution like Yale is not just to bring insights to the market, but also to gather insights from the market and help present them in a way that pushes our community into climate action. This is where students like Akshyah play a transformational role,” says case study co-author Vero Bourg-Meyer '15 MEM, former program director for CBEY’s Clean Energy program and project director for the Clean Energy States Alliance. “She shows a keen interest in understanding the interplay between the worlds of finance, policy and technology.”

Krishnakumar, who interned for Tesla, focused her capstone project on interoperability and open communication standards for EV charging systems. She’s also researched the challenges of increasing the infrastructure that supports electric vehicles and the policy impacts.

After commencement, she is moving to Seattle to join the renewable energy procurement team at Amazon Web Services. Krishnakumar says businesses are trying to maintain less of a carbon footprint at the same time as trying to expand. Amazon has set ambitious sustainability goals for its web services and other departments and working to make change from the inside of a company is vital to making progress on climate change mitigation, she says.

“The scope of change that companies like Microsoft, Apple, and Amazon can do is massive, and just imagine what can happen when you have a majority of pro-environmentalists working at companies like Amazon,’’ she says. “You need people on the outside making demands, but you also need a majority on the inside. Then there is going to be change.”

Krishnakumar says she faced many challenges as an international student at Yale during the COVID-19 pandemic, but as a leader of the Environmental Film Festival and the South Asian Graduate & Professional Association, she found kinship and community.

“Several years back, people were passionate, but they didn’t have the roadmap we have now. It is a roadmap that can work, that can generate money, skills, and employment. No one can say these ideas are idealistic. They are all very doable. That’s what gives me hope.”

With a background in community organizing and experience as an international Peace Corps volunteer, Lac devoted countless hours at the Yale School of the Environment working to bring communities of people together.

Whether leading climate protests, fighting for Indigenous land rights, or working the land at Yale-Myers, Kyle Lemle is keeping his focus on the importance of forests.

YSE Class of ’22: Lovinia Reynolds is Headed Home to Fight for Climate Justice

Returning to her native Brooklyn, Lovinia Reynolds is graduating from YSE with an eye on climate justice in the largest city in the U.S.