New Yale-led research reveals for the first time what the world thinks about climate change and why. Using data from the 2007-2008 Gallup World Poll, conducted in 119 countries, researchers identified the factors that most influence climate change awareness and risk perception for 90 percent of the world’s population. 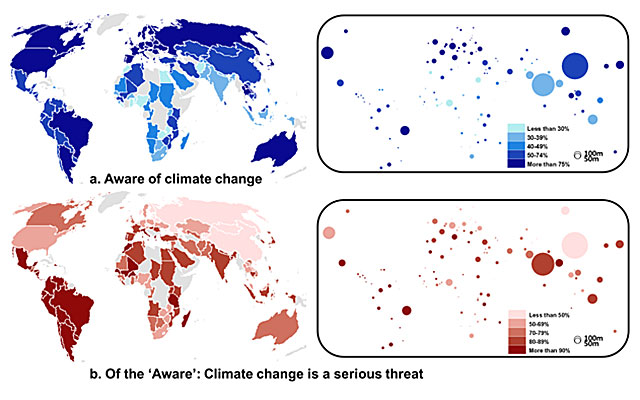 The contrast between developed and developing countries was striking: In North America, Europe and Japan, more than 90 percent of the public is aware of climate change. But in many developing countries relatively few are aware of the issue, although many do report having observed changes in local weather patterns.

The study was published in the journal Nature Climate Change on July 27.

“Overall, we find that about 40 percent of adults worldwide have never heard of climate change,” said co-author Anthony Leiserowitz, director of the Yale Project on Climate Change Communication and study lead. “This rises to more than 65 percent in some developing countries, like Egypt, Bangladesh and India.”

The research team also found that globally, education level tends to be the single strongest predictor of public awareness of climate change. However, the research reveals some stark differences between countries. In the United States, the key predictors of awareness are civic engagement, communication access, and education. Meanwhile in China, climate change awareness is most closely associated with education, proximity to urban areas, and household income.

“This the first and only truly global study where we have climate change opinion data from over 100 countries, so it allows us to compare the findings across the world,” said lead author Tien Ming Lee, a Princeton University researcher who conducted the analysis while at the Center for Research on Environmental Decisions, at the Earth Institute, Columbia University.

Prior studies have found that American views are also strongly affected by partisan politics. But American politics doesn’t map to most other countries and there is little global data on political ideology to compare to, the researchers said.

What does all this mean? Limiting climate change involves major shifts in public policy and individual behavior regarding energy, transportation, consumption and more. Likewise, preparing for and adapting to climate change impacts will require changes in current practices. Governments will need public support for and engagement in climate change solutions. This new research suggests that gaining public engagement will vary from country to country, depending on local culture, economy, education and other factors.

“This study strongly suggests that we need to develop tailored climate change communication strategies for individual countries, and even for areas within the same country,” Lee said.

Added Leiserowitz: “The results also indicate that improving basic education, climate literacy and public understanding of the local dimensions of climate change are vital for public engagement and support for climate action.”

The study was conducted by researchers from Yale University, Columbia University, Utah State University, Princeton University, The University of Massachusetts-Amherst, and Academia Sinica in Taipei.
About this story
Tags