Tucker, Grim Honored for Linking 'Languages of Many Disciplines' 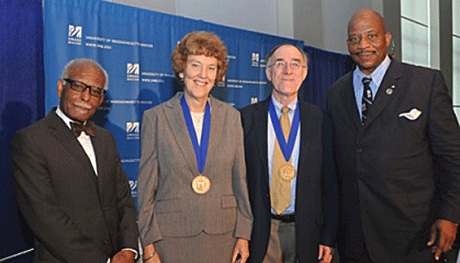 Mary Evelyn Tucker and John Grim, directors of the Forum on Religion and Ecology at Yale, have received the inaugural Joint and Common Future Award from the University of Massachusetts, Boston.

In presenting the award during the university's fall convocation, UMass Boston Chancellor J. Keith Motley commended Tucker's and Grim's years of commitment "to raising our consciousness of the interdependence of all things and a deeper dialogue between science and religion."

The honor for Tucker and Grim was particularly appropriate as the university launches its new School for the Environment, which will integrate the study of science and the social sciences, said UMass Boston Provost and Vice Chancellor for Academic Affairs Winston Langley.

Mary Evelyn Tucker and John Grimwill discuss the latest developments in the emerging field of religion and ecology as part of the F&ES Research Seminar Series (#FESseminar).

After receiving the award, Tucker spoke about the need for integration and partnership in the academic community. “There’s a freedom and creativity here," she said. "It’s not about your C/V, it’s about common good. And that’s what academia should be about. In the School for Environment, science, policy, management, and liberal arts will come together in new conversations."
Published
Tags