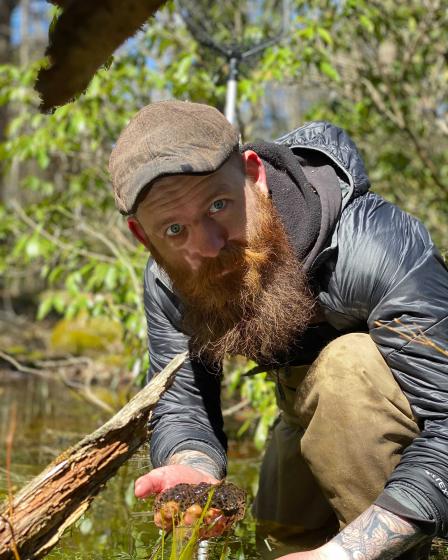 Andis Arietta’s doctoral research found that frogs have evolved in response to climate change in recent years, but that continued warming would likely outpace the species’s ability to adapt to extreme environmental change.

As the story often goes, students who attend the Yale School of the Environment arrive with deep connections to the natural world — an innate passion for physical sciences, a childhood spent hiking through local forests, or a lived experience of facing environmental challenges.

For Andis Arietta ’22 PhD, his journey into environmental education began with a Frisbee.

“It’s a miracle I ended up in college in the first place,” says Arietta, whose undergraduate studies took him to tiny Northland College, an environmental liberal arts school in Wisconsin. A first-generation college student, he admits to being a stranger to the admissions process at the time. Not knowing that most prospective students apply to more than one school, Arietta applied to Northland as a backup at the last minute because the recycled Frisbee they sent was the only promotional material he had not yet thrown out, he says.

From these humble beginnings, Arietta has carved a unique path through education and research to become a renowned scholar in ecology, evolution, and conservation. Recently, his research into how human-induced landscape and climate changes influence rapid, fine-scale evolution was recognized with the 2022 Bormann Prize at YSE’s 38th Annual Research Day.

The award honors the legacy of F. Herbert Bormann, a plant ecologist who taught at YSE from 1966-1992. Bormann’s research helped scientists better understand the complex relationship between humans and the environment and called the world’s attention to acid rain.

The research project that earned Arietta the Bormann Prize was an update of a 2001 study conducted by David Skelly, Frank R. Oastler Professor of Ecology at YSE, focused on rapid evolution in pond populations of wood frogs. Skelly’s experiment found that wood frogs from colder ponds exhibited faster embryonic development than similar populations from warmer ponds — often separated by just tens of meters.

Working with Skelly, who was  his doctoral advisor, Arietta led a reassessment of the data, testing the  wood frog populations in Yale-Myers Forest 18 years later, using the original lab methods and updating the statistical analysis. The researchers found that variations persist in the contemporary populations, but that these embryos were developing as much as 19% faster than the populations tested in 2001. They deduced that the frogs had evolved in response to changes in climate in recent years, but that continued warming would likely outpace the species’s ability to adapt to extreme environmental change.

“The good takeaway from our findings is that wildlife has much greater adaptability than we give them credit for,” says Arietta. “The not-so-good takeaway is that it might not be enough given the rate of human impacts, which could result in some catastrophic problems if the environment continues to constantly change.”

Skelly called Arietta’s findings “perhaps the most important publication to come out of my lab group.

“In it, Andis shows that wood frog development rates have evolved during the last two decades as the climate has changed,” Skelly says. “Populations that have been subject to the most environmental change have evolved the most.

“This result is one of the very few to demonstrate evolution by vertebrates to changing climate and one of the only ones to provide a sense of the limits to such rapid evolution.”

Arietta began researching wildlife populations as a master’s student at the University of Montana, where he focused on road crossing structures for migrating large mammals, sparking his interest in landscape connectivity and fragmentation. He came to Yale to work with Skelly on wood frogs and their “semi-fragmented” pond populations  because “they’re a great model for helping us understand how genes flow and populations adapt," he says.

Graduating in May, Arietta is continuing his work on frog populations, and is now focused on genetics. He’s collaborating on efforts to sequence the genomes of frogs to better understand how these species are evolving, hoping to find the genetic mechanisms underlying the rapid adaptation.

“We think what’s going on, so far, is that there is directed gene flow that allows some populations to be ‘pre-adapted’ for future climate change,” Arietta says.

Uncovering the specific genes, however, will take much more research. “Decades ago, everyone thought that as soon as we sequenced genomes, we could look at the data and say, ‘If you turn this knob, they can grow faster or slower.’ It turns out it’s much more complicated.”

Meghna Krishnadas’ doctoral research into how forest fragmentation alters the underlying mechanisms shaping patterns of tropical tree regeneration and forest diversity was recognized for its novel insight into ecological processes.

Forest Research in the Congo Basin Earns the 2020 Bormann Prize

Peter Umunay’s research, which explores ways to find a balance between conservation and economic development in the Congo Basin, earned him the 2020 F. Herbert Bormann Prize.

Given rare access to a hydraulic fracturing well site in Pennsylvania, an F&ES doctoral student revealed a surprising finding about the impacts of fracking on groundwater — research that earned her the 2019 F. Herbert Bormann Prize