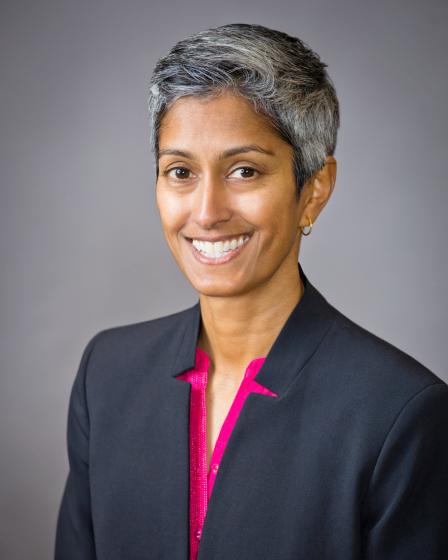 Shereen D’Souza’s '12 MESc path to becoming an environmental leader began when she joined the Peace Corps straight out of college, assigned to help hillside subsistence farmers in Honduras. All of D'Souza’s ancestors in India had been involved in smallholder agriculture, but she had led a typical urban and suburban life in the U.S. up to that point.

“I often describe it as a dormant seed that germinated in me during that time,” she says. “I discovered, ‘Oh, I love this! It’s what I’m passionate about.’ Working with people who are connected to the land and having my hands in the dirt felt incredible.”

Her stint with the Peace Corps ended after three and a half years, and then D'Souza wound up in Oakland tackling urban food justice issues, working to end food deserts and promoting community gardening and local sustainability.

When she turned 30, D'Souza decided it was time to reconnect with her roots. “I quit my job and went to India to work on farms and get to know what my family and ancestors had done,” she says. “And there was so much hardship there, between poverty and development challenges, weather and climate variability … I knew I wanted to work in that agricultural space.”

D'Souza had studied international relations as undergrad at Georgetown and knew she wanted to transition back to international work. She chose YSE as a way to accomplish that goal, impressed by YSE Professor Michael Dove, whose work focused on the environmental relations of local communities, especially in South and Southeast Asia.

“I felt like I needed that grad degree if I wanted to do international work again and be effective at it,” says D'Souza, this year’s Prospect Street Award recipient at YSE’s Reunion Weekend 2022. The award recognizes a recent graduate who has made significant contributions to the environmental field and who exemplifies the spirit of the School through demonstrated leadership, innovation, and creativity.

After YSE, D'Souza fully intended to find international agricultural development work — but things took an unexpected turn. She cast a wide net with her job applications and garnered interest from the U.S. State Department.

Two international diplomacy courses that D'Souza took at YSE — one with Gordon Geballe and one with Roy Lee — had provided her with the exact set of experiences the State Department was looking for. D'Souza had attended multiple U.N. climate summits (COP) and had already worked closely with small island developing states. She knew what negotiations with such island states entailed and how they have an outsized voice, despite their small size, because they’ve done so little to cause climate change and yet are experiencing some of the worst impacts. D'Souza signed on as an adaptation and loss & damage negotiator and, for the next four years, was engaged in the process that ultimately resulted in the Paris Agreement and its adoption.

“The negotiations are very much about relationship building,” D'Souza says. “Even though it can be very adversarial in the negotiating room, you could be arguing with each other at the mic, but you’re still going to go out to dinner or go get drinks afterward. That’s the nature of it. You have to invest in those relationships in order to have good outcomes in the negotiations.”

Today, D'Souza is deputy secretary for climate policy and intergovernmental relations with the California EPA. One of the issues she works on is transportation sector emissions. It’s the sector responsible for about 50% of California’s GHG emissions and also responsible for the air pollution affecting low income communities of color in California .

“We can feed two birds with one seed,” D'Souza says. “Moving to zero emission transportation gets us toward our climate goals, but also our air quality and equity goals.”

Just recently, California Governor Gavin Newsom signed a law requiring California to achieve carbon neutrality by 2045 at the latest.  D'Souza is working with the team at the California Air Resource Board to wrap up that planning process — dubbed the 2022 Scoping Plan, it will become the official playbook for making the goal a reality.

“This plan is going to be the first large economy plan for carbon neutrality,” D'Souza says. “Governments all around the world have carbon neutrality or net zero goals, and they might have the start of plan."

"But this is an actual, actionable plan for carbon neutrality for the world’s fifth largest economy. What we’re doing, other governments are going to pick up on. They’re going to look at our modeling, the pathways, our use of a low carbon fuel standard, cap and trade, carbon capture and sequestration, and they’re going to use it as something they can replicate themselves.”