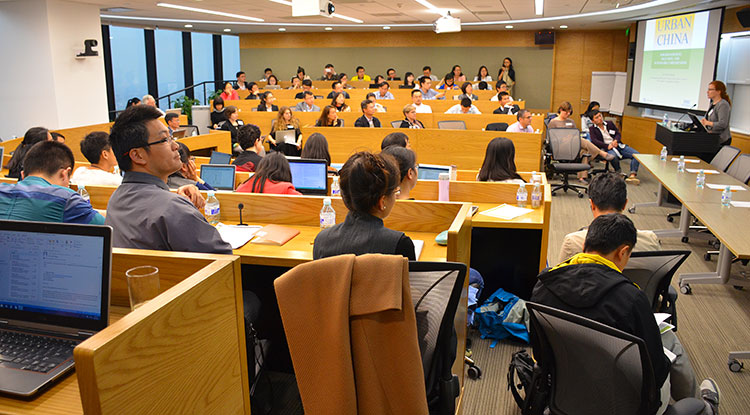 What happens in China’s growing cities will impact the entire planet, Karen Seto tells her students at the Yale School of Forestry & Environmental Studies (F&ES). How leaders handle the unprecedented expansion could have untold impacts on the global climate; it could also provide new insights into how we can achieve a more sustainable planet.

So it’s important, Seto says, to engage with the issues taking place there — and with the people working at the leading edge of science and policy solutions.

These days, it helps that Yale has its own home in China, the Yale Center Beijing, a first of its kind hub where the university can convene and host meetings and conferences in the heart of China’s capital. In late October, a group of F&ES faculty, staff, and students did just that, hosting a workshop on urban climate issues that featured experts from government, academia and the nonprofit world.

During panel discussions experts examined two fundamental challenges facing cities everywhere: mitigating greenhouse gas emissions and minimizing the local impacts of climate change. The events were led by Seto, Associate Dean of Research and Professor of Geography and Urbanization Science at F&ES; Xuhui Lee, the Sara Shallenberger Brown Professor of Meteorology at F&ES; and Professor Peng Gong of Tsinghua University. Tsinghua University and Nanjing University of Information, Science, and Technology co-hosted the event.
Participants included representatives of the Chinese government, the World Bank, the Natural Resources Defense Council, the World Resources Institute, and researchers from a number of top universities in China — including three authors from past reports of the UN’s Intergovernmental Panel on Climate Change (IPCC).

“Convening such high-level discussions is something that Yale can not only do, but it’s something that we do pretty well,” Seto said. “We’re seen as an honest broker. We have the scientific and policy expertise, and we have an amazing network of alumni working on these issues.”

In addition to the workshop, the School hosted receptions for alumni and prospective students interested in the School’s nascent dual-degree program with Tsinghua University.

The two-day event was held at the Yale Center Beijing, a 16,500-square-foot center in Beijing’s Chaoyang District. The center, which opened in 2014, hosts a year-round series of workshops, meetings, classes, and other events developed by Yale schools and programs in collaboration with partners in China.

During the workshop, one discussion focused on how cities can reduce their local and global climate impacts in the coming decades. The discussion also addressed ways that local communities can relieve the impacts of climate change, including strategies to curb urban flooding and the impacts of the urban heat island.

Researchers and practitioners discussed scalable solutions to the world’s urban climate challenges and gaps in the science.

“We focused on urban climate issues because we have expertise in that area,” Lee said. “And also because urbanization is a big piece of the Chinese government agenda. They are urbanizing the whole country, profoundly changing the country.”

And he said there is still an opportunity to achieve transformative change in Chinese cities that are still growing. “The hope is that if you start early enough, and plan early enough, you can design away some of the potential problems,” Lee said.

During the session on climate change mitigation, experts discussed the urgency of approaching these challenges across multiple scales. Research done by the World Bank, for instance, made the case that China can develop “low-carbon cities” by integrating strategies deployed across scales, from single buildings to entire regions.

“There are going to be a number of different solutions and different spatial scales,” Seto said. “And one of the things that this meeting highlighted was that there is not one right set of solutions at any scale. This requires a multi-scale, multi-pronged approach.”

In addition to providing a forum to explore these challenges, the workshop helped the School strengthen its relationship with leading experts across China, she said. “I think it’s indicative of our strength that we can bring together these communities to discuss these issues and potential solutions,” Seto said. “And it’s indicative of the kinds of things we can do going forward.”

Two F&ES students, Marguerite Harden ’16 M.E.M. and Kristin Lambert ’16 M.E.M., who were both in Beijing for the events, plan to summarize the key takeaways from the workshop in an article and video report in the coming weeks.

On the afternoon of the workshop, a shroud of smog hung over the Beijing cityscape outside the windows of the conference center. While this type of pollution has come to symbolize the urgency of China’s environmental challenges, the F&ES students couldn’t help but think about those risks that are not visible to the eye.

“That air pollution we saw outside was a local problem for which there are actually fairly easy solutions,” Harden said. “New York City, Detroit, and other U.S. cities have had the same problem and were able to address it with some fairly simple environmental measures. 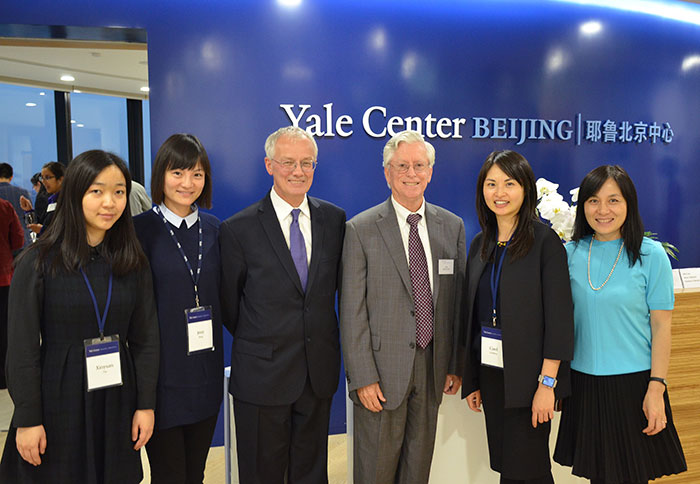 “But inside the conference center we were talking about global climate change, which is not as visible to the eye nor local. And this escalating global problem also doesn’t have an easy solution.”

During their visit, Harden and Lambert met with some of the dozens of prospective students interested in environmental issues, including many interested in a dual-degree program between F&ES and Tsinghua University that was introduced last year.

“I talked with many people who share some of the same concerns that I do, but are feeling more immediately the impacts of the environmental challenges we talk about here [at Yale],” said Lambert. “And it was inspiring that we were able to fill the room with this new generation of students who are very concerned about these issues.”
– Kevin Dennehy    kevin.dennehy@yale.edu    203 436-4842
Published
Tags