Fanning Across the Globe in Search of Big Cats

YSE students are researching myriad ways these animals are impacting the landscape to fully understand their conservation value and the importance of their survival.

To reach his object of study in the eastern Tibetan Plateau, Yufang Gao hiked a mountainside 15,000 feet above sea level. Along the equator, Mary Burak traversed the high, dry landscapes of Kenya. Kaggie Orrick has navigated through thick forests and dense sand in Botswana, and Julia Monk drove 12 hours in a four-by-four truck on sometimes flooded roads to search the Andes
of Argentina.

These current YSE PhD students have fanned out across the globe in search of big cats. From lions to pumas to leopards, they are studying different aspects of how these predators and their prey interact with humans and landscapes and influence each other’s behaviors. Their work will shed light on human-wildlife conflict and advance mutually beneficial ways that communities on the ground can coexist with big cats.

“A lot of large carnivores are being driven locally extinct because of habitat loss, human encroachment, exploitation, or retaliation because they’re preying on livestock. And it’s happening because humans are expanding their use of landscapes for their own livelihood purposes,” says Os Schmitz, senior associate dean of research and Oastler Professor of Population and Community Ecology at YSE.

The traditional approach to mitigating conflicts was to remove people from specific areas and create dedicated spaces, such as national parks, for wildlife. But these actions, Schmitz says, often have little buy-in from local communities and can discount the important effects predators and their prey have on landscapes and ecosystems.

“What this new research is trying to do is be much more sensitive to local communities and indigenous livelihoods and knowledge. Once you have that trust in place, there is the sense that you could make big strides in conservation,” he says.

While the COVID-19 pandemic has kept everyone but Gao in the U.S., the students’ previous field studies have given them enough data to move forward with their research. Here is a look at their work.

Gao ’14 MESc, who is pursuing a combined doctoral degree in wildlife conservation from YSE and the Yale Department of Anthropology, is focusing his dissertation on the quest for harmonious coexistence between people and snow leopards and other large carnivores.

To obtain his data, he sets up camera traps and collects snow leopard scat in the Nyanpo Yutse region of Qinghai Province to analyze their diets during different seasons. He is yet to see one face to face.

Born in Fujian Province, Gao has traveled across China to study tigers, brown bears, alligators, and the ivory trade. For his current research on snow leopards and other carnivores, he interviews, observes, and travels with Tibetan herders and conservationists who are Buddhist monks.

His work here has led him to think differently about the terms “conflict” and “coexistence,” he says.

The chief diet of snow leopards in the winter is mostly livestock, but Gao questions the assumption that farmers are in competition with predators.

“From local people’s perspective, people and large carnivores are not competitive. They are interdependent. They coexist in an integrated landscape,” he says. “Tibetan herders generally understand that it is normal for the snow leopards to occasionally attack their livestock in order to feed their cubs. Because of this empathic understanding, they’re saying, ‘Oh, actually we don’t have a very serious conflict with the snow leopard.’”

What is needed for human-wildlife coexistence is a different perspective about conflict, not necessarily new national parks or financial compensation for livestock losses, he says.

In the high desert of the San Guillermo National Park in the Andes, Monk has spent months in the field studying the important role pumas and their prey, specifically vicuñas (a type of camelid), play in carbon storage and nutrient cycling on landscapes.

Pumas fascinate her, she says, because they are widespread throughout the globe, from the frozen regions of Canada to the southern tip of South America. She has always been intrigued by top predators and their behavior in the wild. When she was a research assistant studying monkeys in Iguazú, a subtropical rainforest that borders Brazil, a rare sighting of a puma during field study crystalized her interest in the species.

“It was really close, and we were just kind of frozen,” she recalls. “And then it finally turned away from us and started walking casually down the trail, not running away or anything, until finally it disappeared. And it was only then that we sort of let our breath go a little bit.”

For her YSE research, Monk has collected data on the nutrients that seep into the soil from carcasses of vicuñas that pumas leave behind after a successful hunt, tracking where pumas have been through GPS collars. She also analyzes the scat of vicuñas and how it affects plant growth. Pumas are the primary cause of death for the herbivores in the region. Where they kill their prey and the decomposition of their kills has a big impact on the sustainability of the ecosystem.

“I do hope that some of our work strengthens the case for conservation of these animals,” says Monk, who won the 2021 YSE Oswald Schmitz Award for Excellence in Research Communication for best doctoral presentation. “If we can see the ways in which these animals are really impacting the landscape, then we’ll understand some more of their conservation value. Once they’re gone, the ecosystems could look really different in ways that we hadn’t expected.” 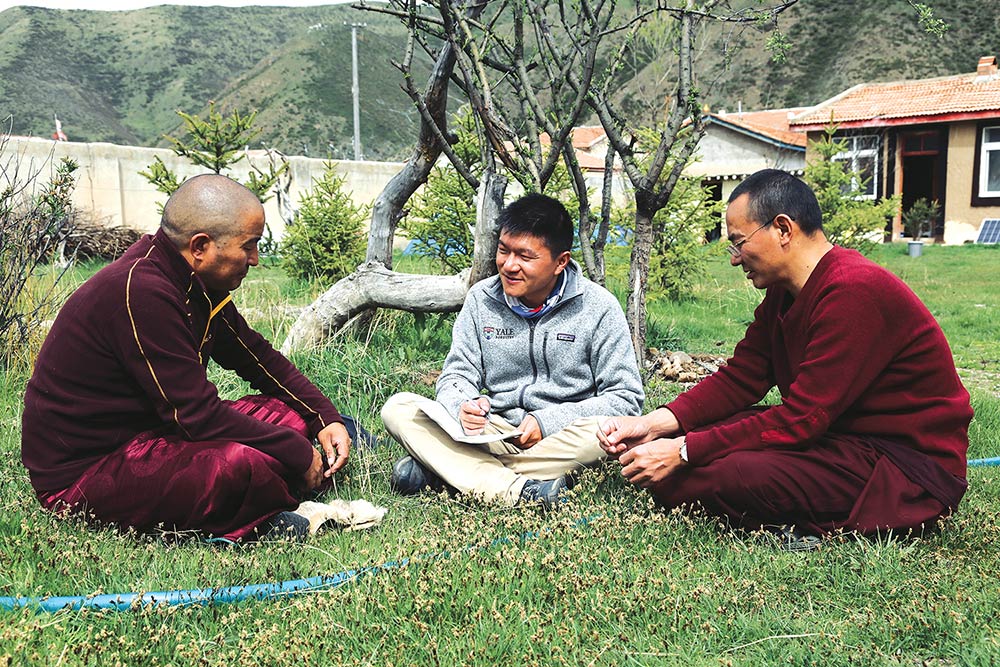 Harvesting and conflict killings over crop and livestock raids are the greatest threats to lions in Africa, but a different approach to land use could avert these clashes. Orrick is focusing her doctoral studies on understanding how lions move across the landscape and how those movements are perceived by humans.  The data, she says, will be key for devising new approaches to conservation efforts.

Using camera traps and satellite imagery when back in the field, Orrick will track the spatial movements of lions, elephants, and other wildlife in Makgadikgadi Pans National Park and the Central Kalahari Game Reserve. She will gather information on the interplay between human perception toward lions and the reaction by lions and other wildlife to human behavior. She will also map where community members gather resources such as grass, water, and firewood and areas where they think lions are roaming.

During her previous fieldwork in Botswana, Orrick navigated through dense forests, thick sand, and open grasslands to track lions and had a close call one night when one walked past her tent. She understands the fear.

“When you are next to a lion and he is giving that deep, guttural call, you feel it. It’s really incredible. It gives you chills.”

She has used part of her time this year in New Haven running computer simulations of animal movement to explore her hypothesis that heterogenous perceptions toward predators impact how predators might move on a landscape.

“My goal is to provide governments, conservation NGOs, and, most importantly, communities with a more holistic and more inclusive representation of what’s happening on the ground,” says Orrick. “There’s always been a lot of frustration with the lack of decision-making that is given to people who are the ones living with this conflict and the daily potential for conflict.”

In Kenya, Burak is studying the effects of human activity on the populations, movement, and genetic diversity of lions and other predators in Laikipia County. In East Africa, wildlife populations have declined by 50% since 1970, with human population growth and land use changes cited as major factors.

“I have made a really conscientious decision to try to look at landscapes as holistically as possible,” Burak says.

In order to understand the genetic traits and spatial distribution of lions, Burak spent her days in the field gathering genetic materials and mapping locations of lion activity. With tips from community members and conservationists on the ground, Burak drove to areas where recent kills had been spotted to scoop up scat samples for analysis.

“I’m basically a glorified outdoor janitor,” she jokes. The first time she came across lion scat, she took a picture and sent it to friends thinking, “I know this is kind of disgusting, but I am so happy.”

In analyzing the genetic data, Burak is able to tell the sex of the lions, with whom they have mated, and how genetically diverse the population is in the region.

On one trip to gather scat, Burak says a lion walked right past her car.

“I think I just froze in awe,” she says.

While working in New Haven, Burak has been writing computer code to represent where lions likely move based on previous behavior and changing landscape configurations to predict human impact over the next few decades.

“I want to try to flesh out all the different possibilities of how local Kenyans might use their land in the future and show the outcomes of how that would affect lions under all of those scenarios,” says Burak. “And then let those who should make the decisions use that information as they wish.” 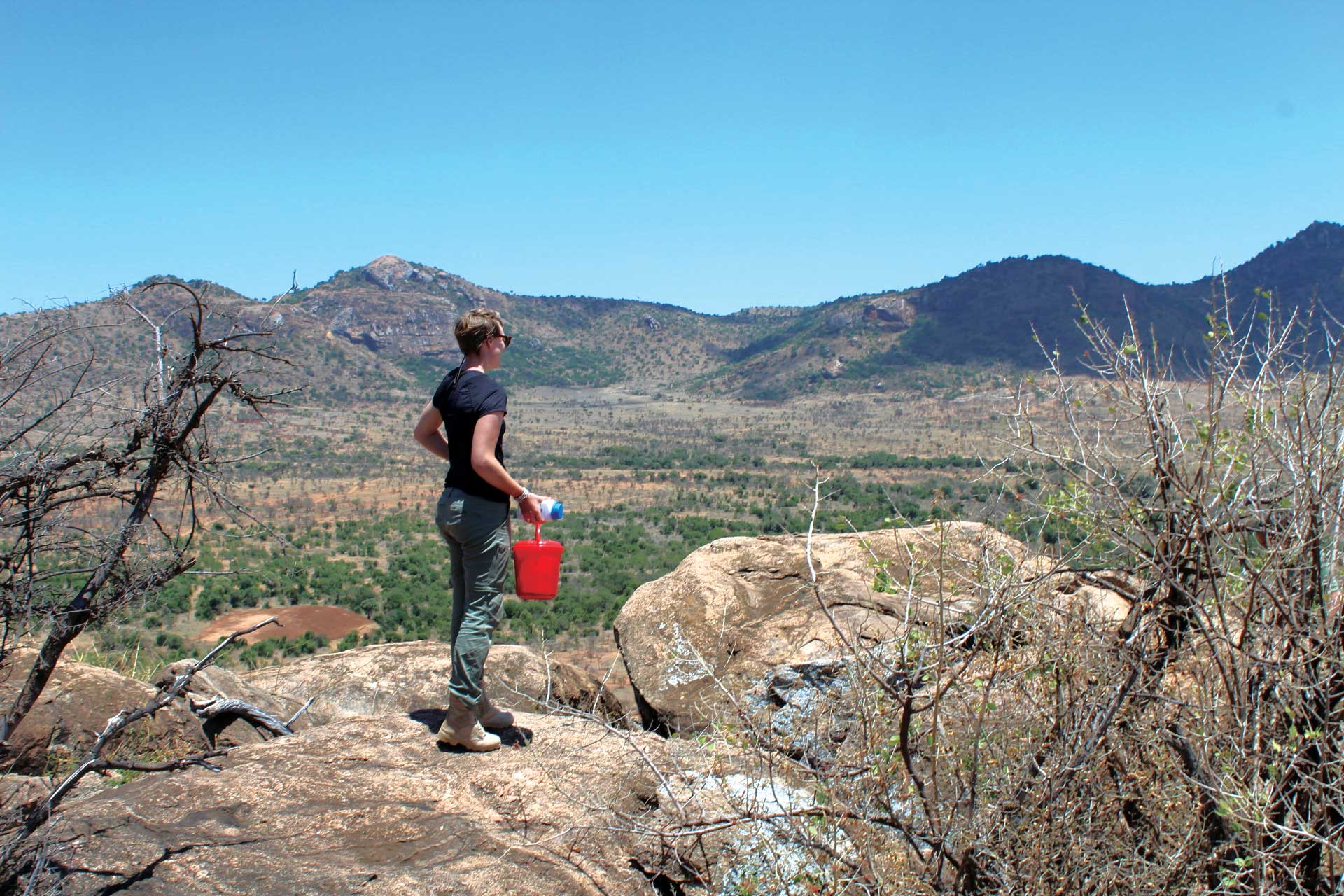 From the Spring 2021 Canopy

Solar in the American Mind

A grant from the U.S. Department of Energy has YSE Professor Ken Gillingham examining what influences the decisions Americans are making regarding solar energy and electric vehicles.

Fanning Out Across the Globe in Search of Big Cats, and other stories.