Student-Run Environmental Film Festival at Yale Kicks Off This Week 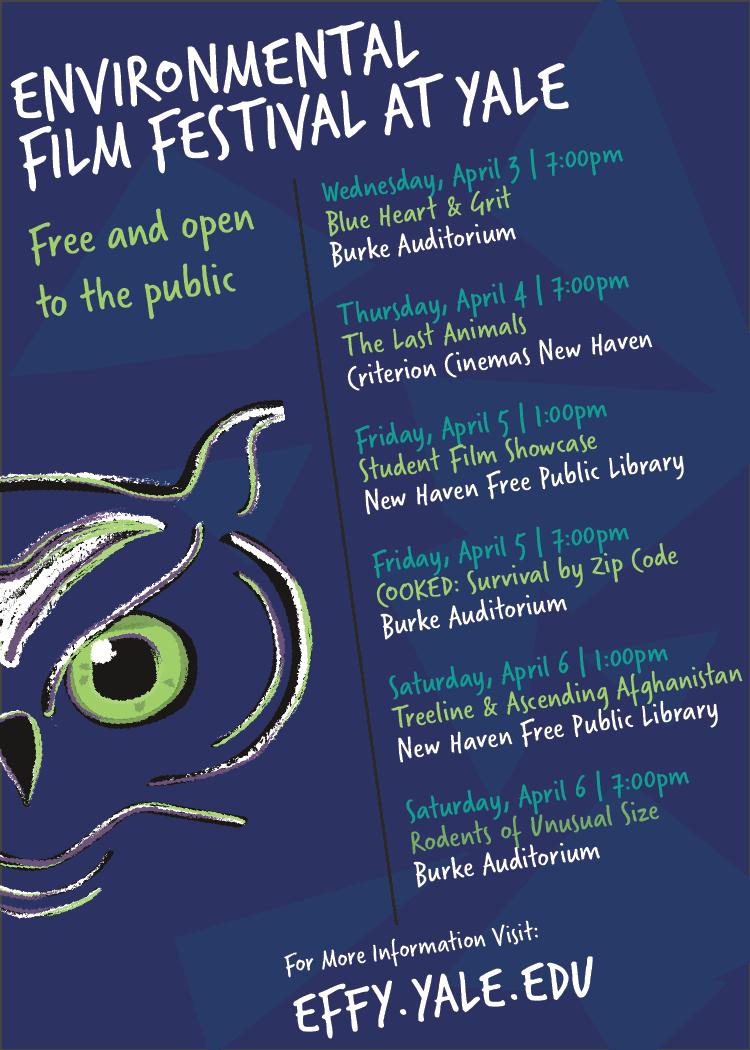 The 11th annual Environmental Film Festival at Yale (EFFY) — a showcase of cutting-edge films about the world’s most important environmental and social issues — begins this Wednesday, April 3, across New Haven and the Yale School of Forestry & Environmental Studies (F&ES).

Organized by F&ES students and free and open to the public, the festival will begin on Wednesday with two films: “Blue Heart,” a documentary about the people fighting to protect rivers in the Balkan Peninsula, and “Grit,” a film about the aftermath of a catastrophic mudslide in Indonesia resulting from natural gas drilling. The creators of “Grit” — Sasha Friedlander and Academy Award-winner Cynthia Wade — will take part in a panel discussion and Q&A session following the screening, moderated by F&ES professor Mary Evelyn Tucker.

EFFY will also branch out across New Haven this year. On Thursday, Criterion Cinemas will host the screening of “Last Animals,” which tells the story of the group of people who battle poachers and animal traffickers to protect elephants and rhinos from extinction.

On Friday afternoon, New Haven Free Public Library will host a student film showcase, screening films submitted from students in middle school to graduate film students around the world. On Saturday, the library will host a matinee screening of two films: “Treeline,” which celebrates trees through the lens of winter sports, and “Ascending Afghanistan,” a film about the first female Afghan mountaineering team.

Other films to be featured include “Cooked: Survival By Zip Code,” directed by Emmy nominee Judith Helfand, and the documentary “Rodents of Unusual Size,” as well as several short films that will be screened over the four-day festival. View the full EFFY lineup

“Our lineup this year is as global as the environmental crisis itself,” said Jesse Bryant ’19 M.E.M., co-director of EFFY. “It’s a testament to the fact that the changes our planet is undergoing spare no one, and that we’re all in this together.”

Student organizers believe that film can be a powerful and fresh voice in the crowded media landscape, moving viewers in ways that a tweet or news segment cannot.

“We hear about environmental problems all the time — we’re constantly being bombarded by messaging,” said Elise Gilchrist ’19 M.E.M., co-director of EFFY. “But a documentary has the ability to transport you to a different place and show you what the problems and solutions look like on the ground.”
– Josh Anusewicz    joshua.anusewicz@yale.edu    203 436-8994
Published
Tags