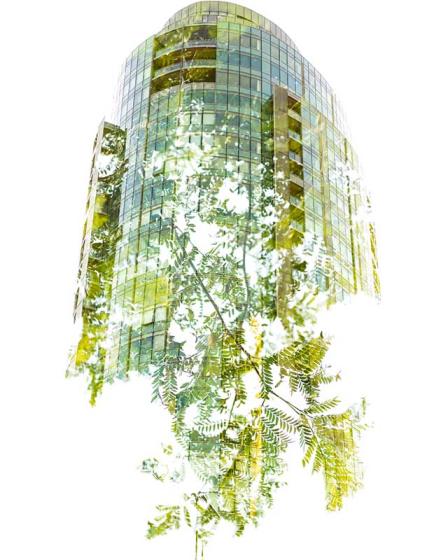 Efficient Buildings Could Save Thousands of Lives in U.S. Every Year

Buildings in the U.S. are responsible for 40% of the country’s total energy consumption. By improving the energy efficiency of new and existing buildings, the emissions generated from heating and cooling them could be reduced – preventing thousands of premature deaths every year.

A new paper published in Science Advances, authored by Yale School of the Environment Economics Professor Kenneth Gillingham and colleagues at Yale’s SEARCH Center and the Yale School of Engineering and Applied Science, lays out two building efficiency improvement scenarios and estimates for how many premature deaths in the U.S. would be prevented in each case.

The burning of fossil fuels, in addition to greenhouse gasses, releases large amounts of harmful airborne particulate matter called PM2.5 (particles with diameters of less than 2.5 micrometers), which can cause heart and lung disease and aggravate conditions like asthma. The reduction in premature deaths is primarily due to the reduction in PM2.5.

The “optimistic” scenario, the authors say, envisions a 50% increase in appliance efficiency (everything from refrigerators to boilers) and a 60-90% increase in the efficiency of buildings’ outer shells by 2050. The researchers estimate that up to 5,100 premature deaths would be prevented yearly if those conditions were met. The “intermediate” scenario – still “a big step up” from what is being undertaken today, says Gillingham – could save up to an estimated 2,900 lives each year.

These estimates of lives saved, however, are focused on changes in outdoor air pollution.

“It is important to also consider the impacts on indoor air quality that may accompany changes in building ventilation,” says study co-author Drew Gentner, associate professor of chemical and environmental engineering and the environment at the Yale School of Engineering & Applied Science.

The potential drawback of the increased energy efficiency of buildings, says Gillingham, is that when buildings are more tightly sealed to prevent leakage of heated or cooled air, the total amount of circulation between indoor and outdoor air also decreases.

“While tighter buildings can partially isolate you from outdoor pollution, it requires greater attention to indoor pollutant emissions,” Gentner says.

For example, inside a home, emissions from cooking or appliances can impact indoor air quality. “If you close the building shell and don't accompany it with recirculation and filtration upgrades, then you can actually face some health impacts,” Gillingham says.

But even without additional indoor air filtration upgrades, the researchers found that improved building efficiency would still save roughly 3,600 per year under the “optimistic” scenario, and 1,800 under the “intermediate” scenario.

The researchers also note that some outdoor air pollution factors, like wildfire smoke, would be reduced indoors if buildings were made more efficient and there was less circulation between outdoor and indoor air. While average outdoor PM2.5 levels have been continually decreasing over time in the U.S., wildfires can sometimes drastically increase outdoor air pollution. And, as recent years have shown, wildfire smoke can spread across large swaths of the country, causing harmful levels of air quality from coast to coast.

“These results, including effects on outdoor and indoor air pollutants, are quite interesting because no one's modeled both before. People have examined similar questions narrowly in small regions, but no one's done it broadly over the entire country,” says Gillingham.

Another factor that Gillingham and his colleagues modeled was the possible effect of a carbon tax. They found that a carbon tax, combined with building efficiency improvements, would save even more lives.