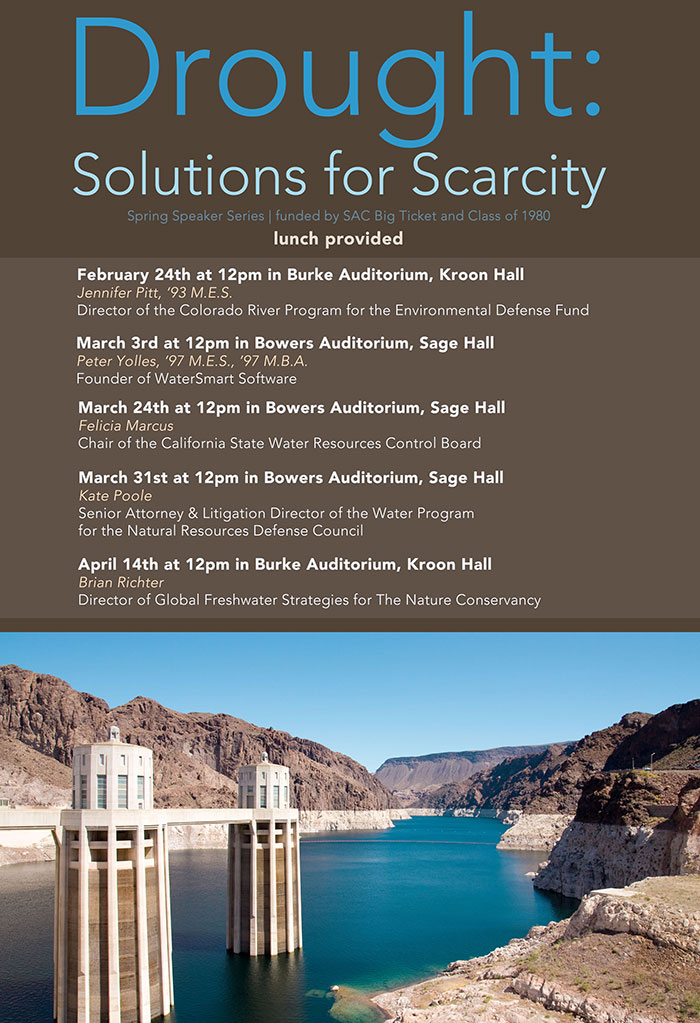 A series of talks at the Yale School of Forestry & Environmental Studies this semester will engage in a critical dialogue about a water crisis that is currently gripping the western U.S.

To promote the conversation about this crisis, three F&ES student interest groups — Fresh & Salty, Westies, and Climate Change — will host a semester-long speaker series titled Drought: Solutions for Scarcity. This series, supported by SAC Big Ticket and The Class of 1980 Fund, addresses how organizations, governments, and companies are responding to increased water scarcity and shaping a more resilient future through sustainable water use. Five speakers representing a range of expertise in water management and policy will visit Yale to share their vision of a sustainable water future.

On Feb. 24, Jennifer Pitt ’93 M.E.Sc. will speak about her experience as a key negotiator in the 2012 U.S.-Mexico Minute 319 Colorado River agreement. As director of the Environmental Defense Fund’s Colorado River Program, Pitt helped ensure that the river reached the delta in a historic “pulse flow” for the first time since 1998. During her talk, which will begin at noon in Burke Auditorium, she will reveal what it took to advocate for and implement the delivery of critical environmental flows to the delta.

“There’s a strong interest in freshwater issues at FES, especially as they relate to the effects of climate change and a growing human population,” said Michelle Camp ’15 M.E.M., creator and lead coordinator of the series. “At the same time, there's widespread conversation about the severe drought out West. This series is a way to connect the two, and to go further by exploring various solutions to the water crisis.”
About this story
Tags