Renowned environmental authors recently took part in a Yale-led discussion that celebrated the release of Old Growth, a collection of essays and poems about the rich inner lives of trees. 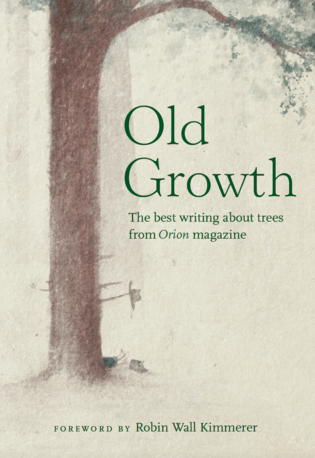 More than 3,500 people came together virtually September 19 in celebration of Old Growth, an anthology of writings published by Orion Magazine, a leading nature magazine in the United States. Botanist and professor Robin Wall Kimmerer, who wrote the foreword to the book, was joined by fellow authors David Haskell and Robert MacFarlane for an open discussion reflecting on the book’s topics.

The event was hosted by the Yale Forest Forum and sponsored by Orion, The Forest School at the Yale School of the Environment, the Yale Forum on Religion and Ecology, and Yale Environmental Humanities.

All three speakers shared an appreciation for the interconnectedness of people and trees. Trees are explored as charismatic individuals, not as “green wallpaper,” said Kimmerer. She and Haskell also spoke to ways of knowing often excluded from Western science systems — like attending to texture, scent, and sound.

A significant portion of the discussion — moderated by Mary Evelyn Tucker, director of the Yale Forum on Religion and Ecology and an advisor to Orion — focused on environmental justice. Many people face systemic barriers that challenge their ability to forge meaningful connections with their natural environment. Though we are always surrounded by some natural system — our atmosphere, our water, our flower boxes — many of us are afflicted by a “species loneliness.”

Here, MacFarlane reminded that trees are our allies; they help us create better and more equitable living spaces. He spoke at length to the urban canopy cover: Trees’ shade significantly cools homes and sidewalks amidst the summer’s heat — “and who can ignore their beauty?”

The discussion also touched upon urban forestry. Half of the world’s people live in cities. But urban tree canopy can vary vastly from neighborhood to neighborhood among social, economic, and racial lines. Urban heat island effects and global climate change are already felt by many. The urgency of these issues is being addressed in part by groups like Yale's Urban Resources Initiative, which has planted hundreds of trees throughout New Haven and partners with residents in urban green restoration projects.

Recently, Tucker reflected on the success of the event and what important themes could be taken from the discussion.

What did you learn from this event?

What is striking is the widespread interest in bringing together a widespread appreciation for the aesthetics of nature with ecospirituality and ecological knowledge of forests.

Why do you think this event was so well-attended and well-received? What did you hear from participants and the audience?

People are keen to feel they are part of a living Earth community. To lose this sensibility and to be awash in a materialistic society leaves people feeling profoundly alienated and disconnected.

A major theme of the discussion was environmental justice. What did you pull from that?

Environmental justice is a critical theme that we need to integrate further, especially for urban ecology and restoration projects. Respecting the diversity of humans and species will be necessary for the well-being and healing of our planetary ecosystems.

The Forum on Religion and Ecology has developed tremendous partnerships (UNEP, IRI, etc.) that use perspectives of religion and faith to find solutions to environmental challenges. How does an event like this inspire you, as someone who perhaps looks beyond the science of forestry and into how we connect with the natural world?

An event like this, which drew more than 9,000 registrants, signals the need for a deeper dialogue of science and ecospirituality. We cannot ignore the weave of these arenas, which is represented in Robin Wall Kimmerer’s book Braiding Sweetgrass. This has had a wide popular appeal that we hope to explore in further webinars.

To purchase a copy of Old Growth, visit the Orion Magazine website.