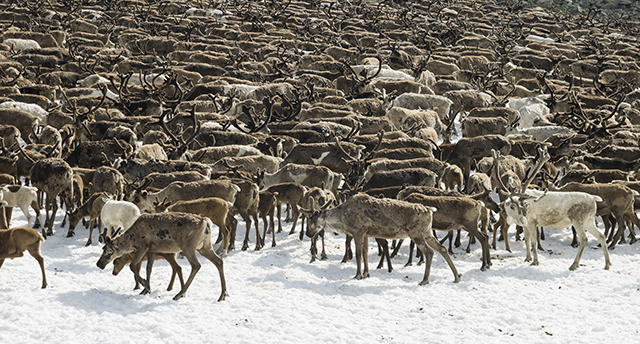 Animal populations can have a far more significant effect on carbon storage and exchange in regional ecosystems than is typically recognized by global carbon models, according to a new paper authored by researchers at the Yale School of Forestry & Environmental Studies (F&ES).

In fact, in some regions the magnitude of carbon uptake or release due to the effects of specific animal species or groups of animals — such as the pine beetles devouring forests in western North America — can rival the impact of fossil fuel emissions for the same region, according to the paper published in the journal Ecosystems.

While models typically take into account how plants and microbes affect the carbon cycle, they often underestimate how much animals can indirectly alter the absorption, release, or transport of carbon within an ecosystem, says Oswald J. Schmitz, the Oastler Professor of Population and Community Ecology at F&ES and lead author of the paper. Historically, the role of animals has been largely underplayed since animal species are not distributed globally and because the total biomass of animals is vastly lower than the plants that they rely upon, and therefore contribute little carbon in the way of respiration.
“What these sorts of analyses have not paid attention to is what we call the indirect multiplier effects,” Schmitz says. “And these indirect effects can be quite huge – and disproportionate to the biomass of the species that are instigating the change.”

In the paper, “Animating the Carbon Cycle,” a team of 15 authors from 12 universities, research organizations and government agencies cites numerous cases where animals have triggered profound impacts on the carbon cycle at local and regional levels.

In one case, an unprecedented loss of trees triggered by the pine beetle outbreak in western North America has decreased the net carbon balance on a scale comparable to British Columbia’s current fossil fuel emissions.

And in East Africa, scientists found that a decline in wildebeest populations in the Serengeti-Mara grassland-savanna system decades ago allowed organic matter to accumulate, which eventually fueled wildfires across 80 percent of the ecosystem annually, releasing carbon from the plants and the soil.

“These are examples where the animals’ largest effects are not direct ones,” Schmitz says. “But because of their presence they mitigate or mediate ecosystem processes that then can have these ramifying effects.”

“We hope this article will inspire scientists and managers to include animals when thinking of local and regional carbon budgets,” said Peter A. Raymond, a professor of ecosystem ecology at the Yale School of Forestry & Environmental Studies.
According to the authors, a more proper assessment of such phenomena could provide insights into management schemes that could help mitigate the threat of climate change.

For example, in the Arctic, where about 500 gigatons of carbon is stored in permafrost, large grazing mammals like caribou and muskoxen can help maintain the grasslands that have a high albedo and thus reflect more solar energy. In addition, by trampling the ground these herds can actually help reduce the rate of permafrost thaw, researchers say.

“It’s almost an argument for rewilding places to make sure that the natural balance of predators and prey is there,” Schmitz says. “We’re not saying that managing animals will offset these carbon emissions. What we’re trying to say is the numbers are of a scale where it is worthwhile to start thinking about how animals could be managed to accomplish that.”

The paper, which is published online in the journal Ecosystems, was inspired by a conference, “Managing Species for Regulating the Carbon Cycle,” hosted by the Yale Climate and Energy Institute in 2012.

Other authors of the paper include Mark A. Bradford, also from F&ES; James A. Estes and Christopher C. Wilmers from the University of California, Santa Cruz; Werner A. Kurz from Natural Resources Canada; Gordon W. Holtgrieve and Daniel E. Schindler from the University of Washington; Mark E. Ritchie from Syracuse University; Amanda C. Spivak from Woods Hole Oceanographic Institution; Rod W. Wilson from the University of Exeter; Villy Christensen from the University of British Columbia; Linda Deegan from The Ecosystems Center Marine Biological Laboratory; Victor Smetacek from the Alfred Wegener Institute for Polar and Marine Research; and Michael J. Vanni from Miami University in Oxford, Ohio.
– Kevin Dennehy    kevin.dennehy@yale.edu    203 436-4842
About this story
Tags